How important are family friendly policies and benefits in organisational culture?

Is there a correlation between a high performing organisation and a family friendly workplace?

There is also the unseen or lesser known part of family friendly policies and benefits that organisations can adopt; these are related to family building options such as infertility treatment insurance coverage, adoption grants, sick leave (for miscarriage or medical treatments), flexible working and egg freezing.

You may have heard the saying – “Culture eats strategy for breakfast”. This simply means that no matter how good the policies are they need to be supported by the organisation’s culture.

Going beyond the policies and benefits, leaders and staff need to develop the values and behaviours that make up the family-friendly culture:

Open Communication – on both work/life needs and institutional priorities.  Staff need to be able to freely communicate to their leaders and vice versa without incrimination or judgement. The ability to give 360 degree feedback freely about what works and what doesn’t contributes to this open communication environment.

Flexibility – at all levels of the organisation.  Creating an environment that makes it OK to ask for flexible working or time off by creating space to.  Believing that employees are less loyal or productive for asking for these creates will creates negative culture.

Commitment – recognition that a good work/life culture benefits everyone.

These values can’t be written down in policy or given away as a benefit…they have to be enacted out by the people we work with every day and inspired by our leaders in our day to day lives.

What other values and behaviours do you think make up a family friendly culture that we can live by in our workplaces, including family building?

Do your leaders say they are family friendly but don’t live by the values they preach?

I love a quick flick through the trashy magazines whilst I queue up at the supermarket*, and this week I was saddened by the headline of the Star magazine:

“This was our last chance to start a family”

“Gwen terrified Blake will leave her” 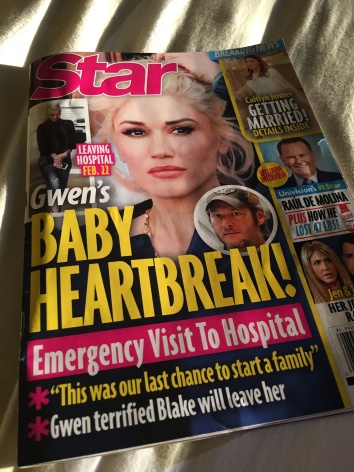 So I picked it up and actually bought the magazine.  I thought it would be about a personal account of Gwen’s struggle with miscarriage.  Maybe a celeb was being open about how terrible miscarriage is and spreading awareness.  So I made an impromptu purchase.

A few moments later a couple queued up behind me and the lady  also caught sight of this headline; she was quietly speaking to her husband about how sad that is…and then….she started crying.  Her husband consoled her and asked- why are you crying?  I couldn’t quite hear her response through the tears, but it made me feel like crying for her, for me and for poor Gwen Stefani.

Later that day when I got home and started to read the article about Gwen Stefani and Blake Shelton’s relationship and their ‘heartbreak’ (I had no clue they were even dating! That’s what happens you get rid of your cable TV to save money! All my celeb gossip knowledge gone!).  The magazine article explained how the couple have been “trying to conceive for four months” (BTW – they have only been dating for four months!) and now they may have to “abandon their hopes for a child together”.  Anybody having to abandon hopes of conceiving their own child is a very sad situation, even if it was only for four months they tried (Gwen is 47 and has 3 boys her youngest is 3 years old).  The Star’s secret source apparently told the magazine that “[Gwen] doesn’t want to talk about it, but her friends are afraid she might have had a miscarriage or was told that she can’t have any more kids.”

What the *%!% ??? …..so basically Star magazine, you created a headline out of some random source who said Gwen *might* have had a miscarriage.  MIGHT have had a miscarriage.  Or she was told she can’t have kids.  Oh and “she doesn’t want to talk about it” – yeh she wouldn’t want to talk about it to YOU, the ‘secret Star magazine source’.  Because you are already doing a shitty thing and speculating to a magazine about poor Gwen’s personal family life.

This source then claims that “Gwen and Blake are so in love and have been trying like crazy to conceive a baby.  They thought it happened – she told him she had all the signs of being pregnant. They were absolutely ecstatic and couldn’t wait for the doctor to confirm the happy news.”  And here comes the clincher of the story “Gwen must be devastated.  I think she’s scared Blake will leave her if she can’t have his baby.”

Am I living in cuckoo land or is this story just outrageous??!! I can only imagine that if Gwen has seen this headline she would be devastated that this magazine published this story about her miscarrying in this manner – whether there was any tiny bit of truth behind it or not.

It turns out (unsurprisingly) this article was simply untrue.  This has to be the worst kind of low down tabloid story I’ve read in a long time, clutching at straws and making something up like that is just so wrong in many many ways.  Gwen & Blake I wish you could sue these big arses for this terrible story.  But I know you probably won’t because you would have to drag your private life about your personal family building through the courts.  And you have only been together for 4 months.  No one wants that at this stage of their relationship, especially as they have been through their own messy personal divorces not long ago. I am so sorry to you Gwen, and Blake.  I am sorry I bought that magazine, I didn’t know.

It’s just shameful Star magazine.  I am boycotting all your publications and your sister ones like OK! too.  I admit I love a bit of celeb gossip, but this isn’t gossip, it’s just heartbreaking 😦

*US translation – I love a quick flick through the trashy magazines whilst I am in line at the grocery store.