I guess the time has come where I am obviously pregnant.  Today on my journey across the pond everyone has made comments or asked me about my bump.

My halloween costume hides my bump – kind of!

Things that people have said to me today…

“Are you sure I can’t get you a water or ginger ale?”

I checked into the American Airlines business lounge and the lady didn’t offer me a coupon for a free drink at the bar (which is something ordinarily you get), in fact she went so far to say as “no alcohol for you…!” Ummmm I paused for a second flabberghasted ‘yeh….I guess none for me, thanks’.  Awkward.  Thanks lady for policing my alcohol intake.

When I went for my 30 week check up with my OB, the nurse asked me…”When did you last binge drink?”, followed by “Do you drink alcohol?”.  I was taken aback, because I answered all these questions when I first signed up to the clinic and I wasn’t expecting them now.  Also, because I am sure that anyone who had binged drinked at 30 weeks pregnant, probably wouldn’t be honest and deny it.

I’m not going to lie, I have had a few sips of alcohol here and there in this pregnancy – some weeks I will have nothing at all, others I may enjoy a small half glass of wine or one or two non-alcoholic beers (because non alcoholic beers do contain a very small amount of alcohol) at the weekend.  I drink them slowly, with dinner and I never want any more than that anyway.

In Germany the other week I was given a free shot of Limoncello after dinner and a coupon for a shot of tequila.  That was a bit too much for me….I gave them to other people.  But the point is that they didn’t blink an eye about it.  In fact in some parts of Italy, doctors recommend a glass of red wine to help keep the blood pressure low in third trimester.

Isn’t it funny how different beliefs and perceptions can be about what is right and wrong in pregnancy?  There is much research to support both sides of the argument, and all we are talking about is ‘light drinking’…and so the jury is still out.  For me, the odd sip of alcohol here and there is OK and I certainly do not condone drinking heavily whilst pregnant where there are clear linkages with Fetal Alcohol Syndrome.

(**Waiting for all the critical comments to come flooding in….**)

Beer – the cool, refreshing, golden nectar.  My first beer was admittedly at a young age of 13.  I hated it, but that’s what everyone else was drinking, so beer it was.  As my palette has grown accustomed to the varieties and tastes I have become a distant admirer of certain beers.  Particularly German Hefeweizen beers.  So during my 2WW it was difficult to come all the way to Germany and avoid the stuff…..so……here I am – two beers in hand!!! 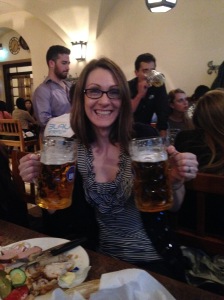 Officially, Chris and I both gave up alcohol almost 17 months ago.  I say ‘officially’ because we have both had alcohol in these months as we have caved on occasion.  However, we have significantly reduced our intake of alcohol to maybe one or two beers/glasses of wine a month, if at all.  The reason?  Because ‘they’ tell us alcohol affects both fertility and the development of the foetus in the early stages.

It is logical, after all, if alcohol is capable of making you do silly things with your mind, then surely it can affect other things too.  I have no qualms in giving up alcohol, plus it saves on the purse, and reduces the calorie intake (never hurts).  There are many conflicting views about the impact of alcohol on fertility.

The UK Government suggests a pregnant woman, or a woman who is trying to conceive should drink no more than 1-2 units once or twice a week (ie one small glass of wine).  Their drink aware campaign (www.drinkaware.co.uk) website is quite informative about alcohol and fertility for both men and women.

One interesting bit of research I read about from Harvard University found that couples undergoing IVF found that women who drank more than six units per week were 18% less likely to conceive, while men were 14% less likely*.  Although this statistic sounds quite high you will only need to drink 3 times a week or more, that is quite a lot.  LAst time I drank that much was at University!!  Generally, I go with the school of thought that one small drink every once in while is unlikely to have any significant impact.  But as the stakes grow higher and more money is invested in our treatment, the more cautious I am about alcohol intake.

So what about that picture above with me holding two beers from Friday night?  Well they actually are not mine, they are the beers of my new colleagues.  BUT! I did enjoy three non-alcoholic Weizen beers!  Obviously the fact that I had three meant I must have enjoyed them.  It was only after one of my German students told me that he was taking a case of the non-alcoholic stuff back to Rome with him that I thought I should give it a go.  Usually, non-alcoholic beers remind me of the bitter taste of Beck’s non-alcoholic that was served when I was on my tours of duty in Afghanistan.  Beggars can’t be choosers, but that stuff put me off it all for several years.  Well at least until now that is.

The non-alcoholic beer definitely doesn’t give you that light headed happiness feeling you would ordinarily experience with the alcoholic version.  But throughout the night I realized that I felt comfortable drinking with my new friends without the pressure of feeling like I had to drink.  In fact near the end of the evening, one of my friends pointed to my glass and said to the waiter “I’ll have what she’s having”, I quickly pointed out it was non-alcoholic.  Obviously he immediately changed his mind, and looked disappointed at me.  He was disappointed because all along he thought I was keeping up with the lads without getting pissed and I was drinking them under the table!  But it was quickly laughed off and nothing more was said.

I think I will try these non-alcoholic options more.  In fact, a fellow blogger (the longest journey) came up with a cracking idea….to put some juice/fizz in a wine glass to give the impression of drinking wine.  Psychologically, that surely has to have the same effect as a non-alcoholic beer.  Well I’m going to try it and let you know 😉

Bye Bye Bavaria!  Thank you for the beer discovery!