I have a broad understanding of Post Traumatic Stress Disorder (PTSD) I’ve read a lot about it…so much so that even my Instagram advertises about PTSD charities on my feed (weird). 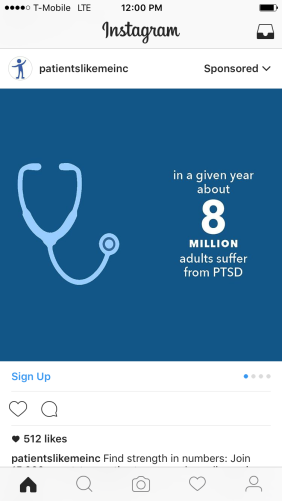 this advert about PTSD came up on my Instagram feed

There is one thing that I suffer from and that is Survivor’s Guilt.  This is when someone believes they have done wrong by surviving a traumatic event when others did not.  In my case I have double the effect.  Why?  Because I survived a horrifying terrorist attack and second, I survived infertility…all within weeks of each other.

I did not know anyone personally who died in the Brussels terror attacks.  But I saw people who were dead or dying being carried out on stretchers, left alone on the side of the road as I helplessly watched.  At the time I wanted to help, but of course I couldn’t, I was (sensibly) being pushed further and further away from the airport.  I have these images burned into my head of a man with his body broken, dusty, bloody, head with loose bandages wrapped around his head, face indistinguishable and arm hanging out, quietly moaning.  All alone.  But I was behind glass some 20 metres away watching this happen in front of my eyes as more as more people were stretchered out.

I get it.  They have a system of triage, there were only so many first responders who were there in the first 20 minutes after the explosions.  The cordon was set up to protect people.  After all, there was a third bomb in there.  We know tactics of terrorists are to create mass effect by targeting the first responders.  But that boundary, the distance was so close, but so far.  I heard people were saying – I’m a first aider…I’m a nurse…I can help.  But they weren’t allowed to.  I can’t get my head around those very short moments.

I feel guilty for surviving, for not being able to help.  Sometimes my mind is heavy with these thoughts.  This doesn’t outwardly appear to affect me overall.  Well, I don’t think it does.  But I do have some bad dreams (to be expected), not regularly, but perhaps it does affect my sleep.  I wake up very early some days, I tend to put it down to my jet lag, but actually, it could be a symptom of PTSD.  I don’t have problems falling asleep, and I’m not afraid to fall asleep, so I don’t feel like it is an issue.

Then there is my pregnancy.  I am overjoyed we finally achieved our dream, we fought hard to get here!  But along the way, I have made friends with some very lovely women who have struggled with infertility too.  And the feelings I have are that of guilt.  Guilt that I have left them behind.  Similar to survivor’s guilt, and in some ways could be classified as such.  Infertility is traumatic.  I feel like I took the last life boat and rowed away from the desert island leaving you all behind in uncertain conditions.  So some days I haven’t been able to open and read blog updates, Instagram is hard to scroll through.

For those of you who are reading this and now worrying about me (my mum probably!!!) It’s OK, I’m OK.  I am sensitive to my levels of anxiety and sadness, and how that impacts my daily life…and I am OK.  Writing this down is kind of a release to me, and re-reading my writing makes me see things more objectively.  And that helps.

I found some words that are helpful (I think) on strategies to cope with survivor’s guilt:

“Rather than focus on the burden of guilt, remind yourself that you and your loved ones have been given a gift — the gift of your survival. Embrace your will to survive and fight the forces that challenge your way of being.”

Reading these words make me feel happy because deep down I know they are true, I just need to remind myself of this when I start to feel sad or guilty.

Join 340 other subscribers
The joy in small things