Tip 1.  Don’t take sea sick husband with you.  Even if he thinks he doesn’t get sea sick.  But it can happen to anyone, so that might be a bit unpredictable.  So probably best to stock up on the motion sickness drugs before departing!

Tip 2. Don’t cruise after 24 weeks pregnant…because apparently the cruise liners won’t let you sail after this.  But that’s all in the small print after you book the cruise.  Check with the cruise liner because each one is different.

Tip 3.  Get a travel note from your OB saying you are fit to cruise just before departure.

Tip 4.  Don’t travel in your first trimester, especially if you have severe aversions to smells.  Cruise ships have all sorts of strange smells on board that you can’t escape.

Tip 5.  Don’t cruise if you are still feeling nauseous; particularly if your cruise ship will take you through rougher seas, such as the Atlantic Ocean – or even in hurricane season – there are plenty of crazy weather systems out in the ocean!

Tip 6.  Choose a zika free destination.  Which is actually quite limiting for cruise options!  Currently that limits you to destinations such as Bermuda (which will require heading out into rougher seas) or head North to Canada or somewhere random such as Alaska.  But of course there are other options in Europe and the Far East…but if you live in the US, this will require a transatlantic flight!

Tip 7.  Be prepared for old ladies who have a pregnancy radar on them and their questions!  You can’t escape them!  They call it their internal grandma radars.  Apparently it’s a real thing.

Tip 8.  Wash and sanitize your hands at every opportunity!  These ships are germ spawning floating prisons. Bleughhhh, ain’t nobody got time to be sick!

Tip 9.  Don’t expect the spa to cater for pregnant women.  Looking to have a massage whilst on board?  It’s very unlikely you will find someone qualified or have the right equipment for a maternity massage.  Sigh.

Tip 10.  Aaaaaand Relax. Ahhhhhhhhhhhhh.  What else are you cruising for?

We have had a wonderful babymoon, cruising from Boston to Montreal…the weather wasn’t perfect, but it was not awful.  It was nice to get away from 100F temperatures, but there were times when it was a wee bit chilly on deck which made the floating prison seem even smaller than I cared for.  (Did I ever tell you how much I hate crowds????!) 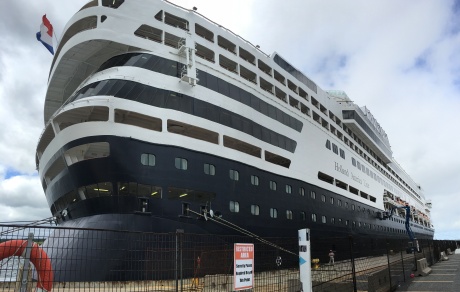 our floating hotel for the week!

We made port calls every day except for one which meant we spent mostly only the evenings on board.  Cruising made travelling to new places very easy, but it can be frustrating to not spend more time in places where there was much more to see and do.  We consider it a reconnaissance trip to later return to cities we liked and spend more time there.  I kind of hate the time pressure, but like the ease of being a real tourist for sightseeing in a short amount of time.  This is handy for being 21 weeks pregnant!

I loved the array of different foods offered.  I still have some aversions to salad leaves and some types of chicken.  We had an amazing evening eating at the restaurant that became ‘Le Cirque’ for the evening.  Simply incredible food.  I admit I did have the Chateaubriand served rare – naughty Dani!  But I could not possibly have it any other way!!!

There was a warning by health authorities that certain types of Oysters from Prince Edward Island had salmonella and so told to avoid these.  I have not had any raw oysters, and wouldn’t consider eating them anyway whilst pregnant, but I would have easily ordered cooked oysters which may have been OK, but apparently this could have also been risky.

I also loved the service offered on board.  We really were spoiled.  We paid for an interior cabin, the cheapest of cheap rooms, but I didn’t feel like we were traveling in economy.   Overall, it was awesome fun, thinking about it, this was the last holiday we will take without a child.  That is weird but exciting! A new chapter of our lives is coming.  (Remind me that I said that at some point in the future if I ever complain about holidaying with a kid!)

10 thoughts on “10 tips on how to cruise when pregnant”