Alisa is here to #FlipTheScript for national infertility awareness week, here’s her story…

First of all, tell us a little bit about you and your partner….how did you meet?!!

Gloria and I have been together for 8 years this summer and married for 4.  We were the young age of 19 when we met (I’ll be 30 this year ahh).  I had been working as a preschool teacher for several years when Gloria started working at the same school.  I actually met her family before as I was her little sister’s teacher.  We spent several years as best friends before we started dating.  Gloria has been in the Navy a little over 4 years which is what led us to Virginia.

When did you realize that you were facing a diagnosis of infertility, how did you find out and what were the issues that you faced?

When we decided to start a family the only obstacle we thought we would face was the obvious one, two females and no male.  Surprisingly, there are many companies that sell the necessary components to help lesbian families or families with male factor infertility.  We originally met with a Reproductive Endocrinologist (A doctor specializing in the art of conception, all things reproductive and the disease infertility) but only because he specialized in helping same sex couples start a family.  It never crossed our minds that we would actually need him for his specialist knowledge on infertility.

I went through all the initial testing before we did IUIs (Intra-Uterine Insemination), some results were a little off but the doctors were not concerned.  After several failed fertility treatments which included rounds of birth control and hormones they started to question why I was not getting pregnant.  With further testing the doctors discovered a very large cyst on my ovary.  I always had extremely painful cycles as well as some other symptoms that at the time we did not know were related.  My mom was diagnosed with Endometriosis at a young age but she had three kids so the thought never crossed my mind.  We decided it was time to do a laparoscopy to see what was going on.

I remember waking up from surgery and asking Gloria how bad it was.  All she said was “stage IV.”  My heart sank I knew there was a huge possibility of this diagnosis but I never thought it was that bad.  I learned that I have what is called a frozen pelvis –

I had so much scar tissue that all of my reproductive organs are fused together.  Although it was a relief to have a diagnosis my world came crashing down.  The doctor said I had less than a 5% chance of getting pregnant with the current treatments we were doing and he suggested IVF (In-Vitro Fertilisation).

We took some time to think about it but ultimately decided it was what was best for us.  Since Gloria is in the military we were able to go to Walter Reed for the IVF treatment.  We spent two weeks in a hotel room going to early morning monitoring appointments.  The five days we waited to find out how many embryos we had were the longest drawn out days we had faced thus far.  We ended up with 6 beautiful 5 day embryos.  Our first cycle we did get pregnant, but our numbers were never high enough for viability.   We went on to do 2 more frozen embryo cycles. In total we did 5 IUI’s and 3 rounds of IVF. 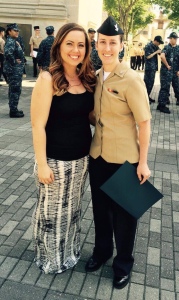 Where are you on your infertility journey now?

Gloria and I are happy to share we gave birth to twins on Christmas Day last year!  We have a boy, Jensen, and a girl, Reese.  We still have two embryos left and have talked about trying for more children, but for now we are enjoying our two beautiful babies. 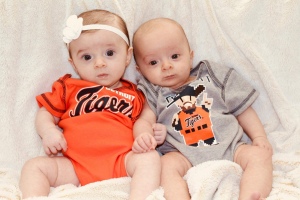 Has infertility changed your relationship with your partner?

I think you are crazy if you answer this question with a no.  I was terrified this journey would tear us apart.  I read so many stories that couples went their separate ways after years of infertility.  In the end this brought us closer than I ever thought it would.

How has infertility impacted you financially? Did your healthcare insurance provide coverage for infertility treatment?

Infertility is expensive!  We were lucky enough that many of our diagnostic procedures were completely covered by insurance, largely due to the coverage from Gloria being active duty.  However for IVF treatment we had to go to Walter Reed who offer military families a “discounted” price.  It was still extremely expensive but nowhere near what some couples pay.

How have you taken care of yourself physically and emotionally during your struggles?

Towards the end of our journey I started acupressure and it was the best thing I could have done for myself.  I had become so desperate that I was willing to try any secret or tip that would get me pregnant.  And believe me, I tried them all.  I never realized how much it would help me, both emotionally and physically. The woman I saw weekly was amazing and I left each appointment feeling like a new person.

How have your friends and family supported you through your journey?  Have you had any experience of lack of support or misunderstandings?

Most of our friends and family did not understand the magnitude of what we were going through.  Like most people, they thought we were two women trying to get pregnant and our only struggle was lack of a male counterpart.  Or if they did have some understanding of our situation the idea of infertility was such a foreign concept they didn’t truly comprehend our struggle.

Even after several failed treatments and surgery we still had a hard time relaying what exactly was going on.  We were met with harsh words and lack of empathy.

It did not help that we were constantly surrounded by pregnant woman.  I remember attending a baby shower for a friend, sitting next to another pregnant friend, waiting to find out the results of our first IVF cycle and a lady saying to me “you probably won’t ever had kids because you have two dogs and people with two dogs don’t have kids!”  I sat in the bathroom crying, trying to compose myself because we all know the worst place for an infertile person is a baby shower.  Looking back I realize how insignificant the comment was but at the time it was heart breaking.

We were also interrogated every time we joined in a conversation about children. Our fertility struggles would come up, and we would be asked why we do not “just” adopt. I am not certain if all couples struggling have heard this or people seem to think it is appropriate to tell a lesbian couple to “just” adopt. I could go on for pages about how this is one of the most insensitive comments that was just freely thrown around.  For couples going through infertility, I know most have thought about adopting, however, “just” is not fair to the children that are in the system. This is a disservice to these children. It also does not account for the families to take in these children as their own, to later have them ripped out of the homes that were built around them. We have discussed adopting children, as we want a larger family. We also know that when the time comes, it will be as hard as our journey in the last 3 years, with a possibility of it being even harder.

I would like to give a shout out to my little sister.  I can’t even tell you the amount of crying phone calls she received from me.  And she would always answer whether it was 3 in the morning or 8 at night.

I would call her with my crazy symptoms and she would google them so I wouldn’t read all the horror stories.  She always checked on me to see how I was, even when I was at my worst. She was the first person I called when we found out we were pregnant.

What has been the hardest point of your journey and how did you deal with it?

The hardest part of our journey was after the loss of our first IVF cycle.  The doctors gave us such hope that it would work the first time we really never expected it to fail.  I was sitting at my desk when I got the call from the nurse that our numbers were not doubling like they would expect and I should prepare for the worst.  I texted Gloria that I needed her to come home and by some miracle, she was able to get out of work early.  It was the first time she cried. We just sat there holding each other in disbelief. I told her that day I didn’t want to try again.

I was done and my body couldn’t take any more.  I spent almost a month saying we were done, just feeling so angry and alone.  Shortly after was Christmas, I remember hanging up our stockings and thinking I want to hang up stocking for our children.  I told Gloria I wanted a baby for Christmas the next year.  And boy, did she deliver!

If you could go back in time, what advice would you give yourself?

Just breathe and have a drink! Don’t obsess over all the details so much and just take each day at a time. Most importantly, do not give up hope.

As it’s national infertility awareness week, what message do you want to share about infertility to the general public?

I would like the infertility community and the general public to know that the LGBTQ community is in this too.  Gloria and I met so many people that just assumed we did not understand the heartache and loss of infertility. We are not different to any other couple that wanted to start a family and faced the heartache of experiencing fertility issues. 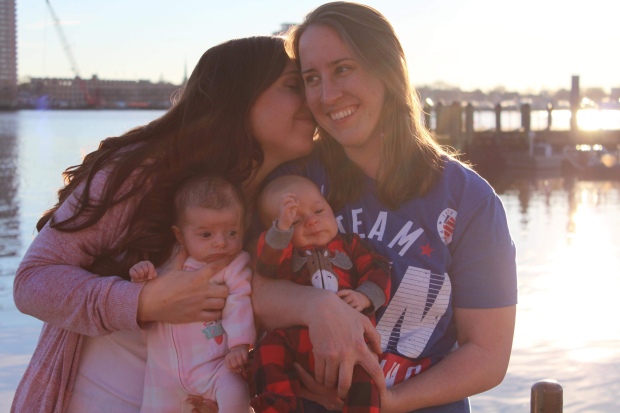 Join 340 other followers
The joy in small things