Several months ago I googled ‘can cats tell if you are pregnant?’.  My female 3 year old cat, Sushi, was being overly affectionate just around the time I was coming close to pregnancy testing time.  It turned out I wasn’t pregnant that month, so I kind of forgot about it and didn’t think much more of it.  But two nights ago I had BOTH of my cats on my bed snuggling up to me.  This is very unusual because Diesel, my male 9 month old kitten, tends to push Sushi off the bed as soon as he realises she is on the bed with me.  So as it is close to pregnancy testing time again, I wondered about this question again and decided to research a bit more into it.  So what did I discover? Can cats tell if you are pregnant?

The Research is thin.  It is evident that cats can detect smells and vapours that are invisible to humans, after all they have 10 to 20 times more sensory receptors in their noses than humans (but not quite as many as dogs, who are far superior in this respect).  But I have yet to find any evidence that associates a cat’s ability to detect pregnancy – I could not find anything that even looks vaguely scientific.  I even tried google scholar, but found little of significance.  There is, however, a lot of discussion online about the subject, and is well discussed in forums and pregnancy related websites, the evidence is purely anecdotal.

Cats detecting cancer.  So what can cats sniff out?  Apparently, cats can detect cancer.  It turns out that there has been some research into understanding dogs’ talents in sniffing out cancer, but evidence for cats’ ability to sniff out cancer is again, anecdotal.  This is mostly because you can train a dog, but it’s a lot harder to train a cat!  So research can be difficult to undertake with cats in this respect.  However, there are stories about cats who have detected cancer before the owner even knew about it. For example, Fidge the cat constantly lay on her owner’s right breast for two weeks.  When her owner went to the doctor, they found a pea sized lump in her breast, which may have killed her if it had not been for Fidge.

Amazing stories of heroic cats using their nose.  On my scavange for evidence I came across some other lovely stories of cats who have saved their owner’s lives with the use of their ‘spidey senses noses’.

Oscar.  In time, staff at the nursing home began to rely on Oscar as an “early warning system” announcing to those present that it was time to notify family and increase hospice services for those close to death (More about Oscar here).

Basil.  As gas fumes leaked from the kitchen stove top, Basil began to swat his owner’s face as she lay in bed, trying to get her to get up and recognise the problem.  After an hour of his persistent behaviour, Basil’s nose saved the day.

Tee Cee.  This cat can detect when his owner is about to have an epileptic seizure attack.  Tee Cee sits next to his owner and stares at his face, indicating an episode is about to occur, allowing him and his partner to prepare for the attack in time.

So, my dear cats – are you clever enough to detect pregnancy before my pee stick does?  Just a couple more days to find out for sure…Watch this space! 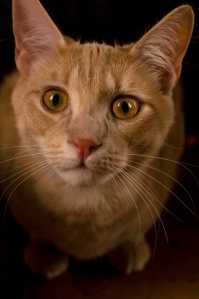 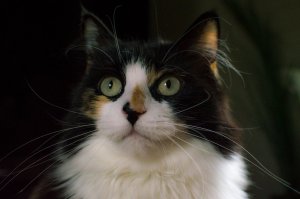 7 thoughts on “Can your cat tell if you are pregnant before you do?”